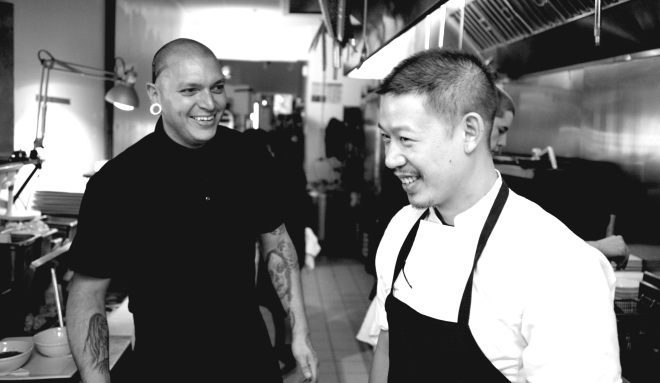 “Esse Quam Videri” – To be rather than appear.

A couple occurrences gave rise to this week’s post and it was an interesting culmination of events. The first was awhile ago when I was hanging out back of house at a buddy of mine’s shop. He has a solid prep crew, a lot of hard working veterans with a few poopy, lazy millennials thrown in but overall a pretty productive and cohesive team. I was jawing with one of the prep cooks talking shop and just generally checking in about the state of the workplace when she remarked “There are too many Chefs and not enough cooks”.

The next was writing a bio for a fellow Chef. I do a few stray ones here and there as a favor finding them a bit pedantic at times so generally avoid the task. When I do decide to jump in I usually talk not only about the where and what of their career but also the why. The weltanschauung that makes them who they are as a Chef. During the course of scribing said exposition I reflected on the previously mentioned comment as I plied my trade, perhaps getting a little obtuse about the nature of what we do in the practice of our craft. I stated, in regards to my compatriot, that “The restaurant world breaks everyone and the beauty lies in handling the grace of being broken’. Maybe a little Hemmingway-esque (sorry Papa) but also true and also food for thought.

The last was an exchange with another fellow kitchen warrior, one whom I respect immensely. We were having a lively email conversation about some of the less attractive aspects of what we do (the business side) when he quite eloquently, and in the most simple terms, stated “very few people really know the definition of Chef anymore”. I couldn’t agree more.

Let me speak to my experience. First off, I never asked for the title – not even once. I got it handed to me. I’ve cooked since I was a kid and have worked in The Biz on and off for decades but always considered myself a cook first and foremost. Several years ago I landed a full-page spread in a well-regarded South county rag where they proclaimed – like a carnival barker “Chef Mau is the culture of cool-personified”.

“Okay” said I. “Sweet. I guess I’m a Chef now”. I’m still not always comfortable with the word but it’s good for my career and professional standing so I won’t protest too much. But let’s get something straight. I’m not much of a Chef in the traditional sense but can be pretty handy at times. I never went to culinary school, have never, ever even once Sous Vide’d ANYTHING (and don’t plan on starting now) and may or may not know the difference between a large radish and a small turnip. I want my spirit as a chef to be like an empty space avoid that’s waiting to be filled – that’s where inspiration comes from. I also embrace knowing nothing. Nothing at all. It means I’m learning.

Need to figure out a resupply via helicopter in the Sierra High County? I’m your guy. Get a call to feed 300 people Cuban food with less than 24 hours notice? Handled. Want to hear about the sixteen different permutations of the Great American Cobb Salad? Let’s have a coffee. And I may not have the classics like pate or ratatouille figured out but I’ll stack my Tri-Tip, Basque cuisine or any regional Mexican/Mediterranean up against anyone. My days as a grinding line cook may be over but I also don’t start freaking out unless the building is on fire and many of the fresh-out-of-culinary-school set should learn that lesson too.

So if I got stuck with the title what makes me a Chef? What makes anyone a Chef? And what’s the difference, in a spiritual and physical sense, between the two. Let’s break it down.

Cooks have it easy. To them it’s thankfully just a job. When and if they sick of that kind of work they gleefully change course and become retail clerks, pool guys, secretaries, or whatever. They’re don’t have any spiritual or otherworldly connection to what they do. When they get off work they have time to connect with their kids, smoke weed and play video games or otherwise enjoy what could be termed the life of a normal working person. With very few exceptions do they lay awake at night thinking about what they’re gonna make the next day much less whether or not the produce order came in and if everything landed onsite like it should. That by no measure doesn’t mean they don’t take pride in their work, but it’s just that. Work. And work means it’s something you do to pay the bills, not because it’s an inner part of who you are as a human being.

That’s where what could be termed “Chefs” are royally fucked. Chefs are ruminating on their craft in the back of their minds the overwhelming majority of times and it can consume them like some sort of delicious, bittersweet cancer. Chefs, like most artists (just ask Sir Paul McCartney) execute their passion in their dreams. I remember the first time I dreamt a recipe and it freaked me right the fuck out. Chefs also don’t do what they do to be cool or impress people, not real ones at least. They do it because they can’t help it. The irony is that for most great Chefs, at least in my experience, their actual cooking is the least interesting part of their lives. The good ones are into some weird, esoteric pastime to take their minds off things and if you want to see some weird ones just ask around.

The of and short of it is this-being a Chef sucks and that’s when you know you are one. It doesn’t take away from the enjoyment of it or the desire to excel. It does mean that you are chained to it like a slave chained in hull of a Roman warship pulling that oar purposefully towards your own demise. Doing what we do is almost like an addict that can’t put down that crack pipe no matter what it does to their lives. In the culinary world there are many mirages. Some simple and direct, others harder to peer into. Chefs in particular suffer from a spiritual version of this malady, sometimes losing track of their calling by letting ego get in the way. To be truly great at what we do requires a Chef to be subservient. To their cuisine, mindset and circumstance. Understanding that there are no absolutes and perfection is the enemy of excellence. So be careful of what you wish for aspiring Chefs.