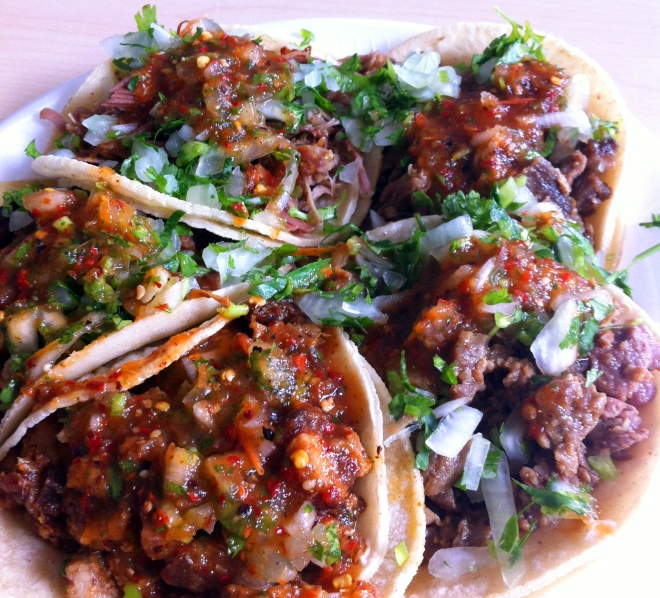 Long ago, in a previous 909 life, there was an absolutely filthy-yet-magnificent taqueria called Mexico Lindo located on a dingy stretch of Euclid Avenue in my then hometown of Onterrible. For a kid raised on Taco Bell enchiritos (a bastardized enchilada, quite horrific actually) and Rosarita make-at-home taco kits as “authentic” Mexican, it was quite a revelation. The interior was less restaurant and more POW camp. Rife with squalor, flies and screaming babies it was a hotbox during the summer that would have broken even the most hardy of gabachos. But their asada was a knockout and if I had a nickel for every squirt bottle of their salsa roja I drunkenly stole off their tables I’d have a big ‘ol stack of nickels. It was the best ever and I still can’t figure out why.

We’re pretty lucky here in the OC to have a lot of great taquerias, many of which have wonderful house-made versions of this classic taco topping. There are some notable out-of-county ones, LA’s TV café being a surprising example. Or try stopping into a hole in the wall shop off the 99 freeway in Taft or Lamont where no gringo dares to go and tell me what you think. But central Orange County is positively peppered with droves of taquerias, most of which are quite proficient at what they do.

Salsa roja, like beurre blanc, béarnaise or most of the basics is shockingly easy to make but a disaster of epic proportions when someone screws it up.
It should be pretty self-evident what it is but, in case you’ve been living on Del Taco, here’s some salsa roja 101. We’re not talking about Salsa Casera, the stuff most gringo-y shops serve with chips being used as the vessel to transport it. Nor are we talking about Salsa Mexicana, the slightly spicier jalapeno-heavy version of the above, like the stuff served tableside at Super Mex. Salsa Roja is a simple mix yet definitely a “whole is greater than the sum of its parts situation;” the basic ingredients are chiles (dried, fresh or roasted), garlic, tomatillo, salt and maybe a few stray spices. Rarely do so few ingredients combine to make such a complex flavor.

So what makes a good one? Certainly not just heat for heats sake. I call it “hot in the middle.” (Sorry, I know it sounds like some weird group sex act.) It is a pretty good way to examine how a good salsa roja is supposed to taste. When you first eat it should come across with some chile, garlic and a bit of tomatillo. Then the spice should come in, the chile arbol throttling things up with maybe a hint of smoke if the cocineros toasted them. Then, the most important part is when that heat burrows through the roof of your mouth like a honey badger and into your sinuses with a hint of cumin or even clove. That’s what really gets your attention and sets you to sweating like Chris Farley doing Bikram yoga. It’s really a three-pronged assault and the tough part is none of this should overpower the flavor of whatever it is on; it should complement it. It’s a delicate balance for sure and there are a couple shops hereabouts that do it particularly well.

I’m a big La Reina fan; I love the one on Tustin Ave in Orange (with its narrow aisles reminiscent of El Toro Market) and used to get all my Mexi-supplies for The ReTreat there. They make one hell of a roja, just slightly thicker than some with a great roasted flavor. It lacks a bit of the “nose” on the back end but there is something about it – possibly more cilantro that gives it a flavor brightness that other rojas don’t always have. It’s worth a stop for sure and I still say they have the best tortillas and carne preperada.

Soho Taco’s salsa aceite is not technically a roja, but it’s close enough for me to mention here. I’m a big backer of Soho’s mission, serving upscale traditional-based tacos at a reasonable price. This gourmet street taco nonsense is insulting to consumers; the idea that you should be charged six or seven bucks for a single taco (no matter what it is made with) is an affront to anyone’s sensibilities. If you are going to charge 7 bucks for a taco it had better ride home with me, open my car door, grab a plate for itself to be served on then wash/put it away and maybe blow me depending on my mood. But I digress. Soho’s aceite is perfect and it’s hard to find anyone making it. I was skeptical about them using olive oil as the base but it works perfectly with the toasted chiles, garlic and salt all ground to a paste of achiote-esque consistency. It’s a winner for sure.

Super Antojitos makes a stellar one and it’s the favorite of many of my friends whose taste in all things Mexi I respect. A tiny bit hotter than some, it reminds me of a more complex version of El Gallo Giro’s. I think most rojas go best with carne asada (theirs is great!), buche or tripas but Antojitos defies this by pairing well with their al pastor, which is also noteworthy. And when I hoist one of their burritos I feel like Ben Roethlisberger falling back for a pass – they are that substantial. They also have a rare dish, molcajete, which comes off very well and makes it worth a visit.

I know this is probably going to start a fight but I’m gonna have to give the nod for OC’s best roja to Taqueria Tapatia. I like the old shack-like strip mall version (kind of reminds me of the Mexico Lindo of my youth) although there is a new, mega-shop around the corner that is more like a Taqueria de Anda than the humble one nearby. I’ll pass on the grande version. Their roja has that ethereal flavor that hints at a tiny bit of allspice or something, but it’s magic when it drifts up from those perfectly grilled tortillas topped with one of their amazing meats. The al pastor here will give Antojitos a run for their money and I am positively in love with their carnitas, a bit of orange in the meat that blends with their salsa verde, which is a trip to deliciousness. The thing I most appreciate about the roja here is how it opens up, almost like wine, when it’s put on warm food. The flavor transitions from a rugged spice to a wafting heat effortlessly and you’ll taste it with your nose a nanosecond before your mouth knows what’s going on. And (shhhhhh) it’s dirt cheap if you want to take some home. I catered an event years ago and they sold me a quart for 5 bucks.
There’s a whole universe of taco joints out there and I may have missed a few, but my doctor can attest to my research efforts over time with this last run of cholesterol tests. I’ve done plenty of footwork and embrace the gift we have here which allows us to enjoy, cheap, plentiful and delicious Mexican grub. Try finding a real taco in Boise or Detroit and you’ll appreciate what you have. And remember, don’t be afraid, the dirtier the floor the better the food I say!