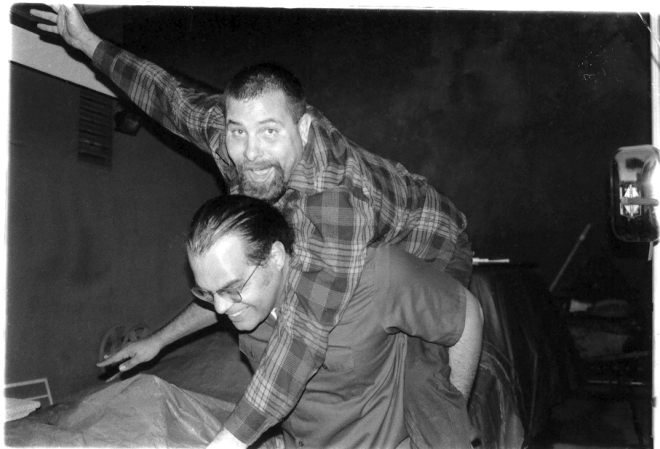 This June 25th is a day of remembrance for Anthony Bourdain on what would have been his 63rd birthday – some of his hotshot compatriots in The Biz designated it so, although the actual date of his passing was a few weeks ago. This year also marks a tough one for me, personally, with the tenth anniversary of the passing of my younger brother, Christopher Robin Mau. We were tight by any standard, including brothers. If you’ve never watched someone drink themselves to death, I can tell you firsthand it’s not much fun. But first, Mr. Bourdain.

I received a text from our former Editor early that morning last year. It was a quick “Have you seen the news?” I replied “No.” It had been a long night in the kitchen the evening before and I was blissfuly sleeping in, recovering to go at it again that afternoon. Once I wiped my bleary eyes and splashed the smell of the sauté station off, I peeped my phone to receive notice of the demise of Mr. Bourdain. It was a hurried effort to pen my tribute piece for this infernal rag. I managed to get a draft going and finished while actually working the line at The Ace later that day. The irony was not lost on me and, although I had never met the gent, I thought he might be looking down on me with an approving nod as he made his way to whatever Valhalla awaited him.

That next day I was in LA, riding along schlepping deliveries with a buddy of mine who has a small fish company and that’s when it really hit. We made all the usual stops along the West Side and the tenor of the kitchens was palatable. Chefs are a hardy lot, generally, and not ones to varnish their opinions, but they were strangely sullen that day as they wolfed down their food between rushes or smoked weed in the alleys of Abbott Kinney. The unspoken tone was like a bunch of grizzled combat vets who had just lost their favorite C.O. – one who had dodged bullets and glided between dangers, only to die by his own hand alone in his tent. Disbelief wasn’t there so much as resignation, like if this guy couldn’t make it out alive what hope do any of us have of doing so? Chefs, like all other creators, inhabit a world of colliding, disparate energies and the ensuing inner chaos can have results that don’t end well, even for our heroes. Sometimes you finish a dish, other times, it finishes you. So it was with Mr. Bourdain, despite all his outward success.

Now, my brother was the best cook I’ve ever known, period. I’m not saying he would have blossomed into a great Chef in the operational sense, but he had the spirit to achieve some greatness that only Providence had reason to deny him. Some things are not for us to know. But Chris’ way was his own. He knew more about everything than anyone ever knew about nothing and it seemed natural as breathing. He dove into the world of gritty taquerias long before it was fashionable for any gabacho and spent steamy Pomona afternoons at a hole in the wall Mexican joint learning the secrets of Chile Colorado and Pozole from an endearing abuela. He mastered the art of the redneck/punk rock breakfast like no other, one which is still spoken of to this day. Only Chris could bring a half broken, rusty Weber kettle grill with him to a Rose Bowl game and whip up the best run of smoked chicken outside of Hot Springs, Arkansas. (That’s where the best is btw). He had a disarming, childish charm that was covered by bravado and tattoos – all of which were born from his hard fought years growing up in the Inland Empire.

We had come on at the original District Lounge in Orange to run the kitchen when they took over the epically seedy Loc Vacitos. He and I had a small catering company, Two Brothers BBQ, for a bit before that, but this was our first foray into a brick and mortar. It came out the gate pretty strong and the food was well received. The funny part (and I’ll admit this now) was that we didn’t taste a single dish until a few days after we had opened – we had done it all before. One night, Chris was working the line wearing dingy overalls and a faded red T-shirt which was more fitting for Appalachia than a kitchen. I was working the floor when a well-heeled member of the Orange elite approached me. She asked “Is that your brother?” I said yes. Then she leaned in and softly said “Well, I just love his costume”. I looked at her, then lovingly at my brother Chris and said “Yes, it is quite a costume.” That’s how he was.

But I swear to Christ the guy could fucking cook. I mean… like it wasn’t even fair. It was like “Zen and the Art of Motorcycle Maintenance” with him. Just finding the most mundane ingredients and pouring his heart into them – it really was something to watch. And it just happened, just flowed, with an ease I’ve never seen. There were no words to describe the process, no term in any language of this world to fully encompass the way he did things and, more importantly, the why. That’s where he and Mr. Bourdain crossed paths without actually crossing paths – understanding the alchemy of people and places, the artistry of caring, and the fleeting yet sacrosanct nature of the palate.

But in the end, that caring took away my brother via the bottle. There were no online tributes, grandiose articles or network news coverage – although he deserved it. Just a blip on the social media radar and Chris’ culinary legacy and smile faded away with just a slight nudge from time itself. Mr. Bourdain was more fortunate, although, as we all find out, memories can be brief. But his echo will ring longer than my brother’s, even though their own headspace was the root of their demise in equal measure.

It’s all the rage right now to comment on addiction and mental health in the restaurant industry, which is a good thing. It’s true we generally party too hard and work long hours. The people that really care pour their guts into what they do – which can make it even worse. In a certain sense, we do get paid to rage hard. That’s just part of The Biz. But there is a dark side, a moment when the fun fades and reality sets in. When what you do and why you do it seems to stop working and every moment turns into pure reflex to get away from whatever seems to hurt so Goddam bad. I know because it happened to me and I had to take a long hard look at what I was made of to get my head around it.

I have meals to make, books to write and people to love. I didn’t want to end up like my brother with an empty Jameson bottle next to me. It may seem blasphemy to say now, but I don’t want to end up like Anthony Bourdain either. When that moment comes and you reach the point that everything of merit fades, all your achievement and failures, passions and exaltation, greatness and loss. Then that battle is over.

As Chefs we lose a bit of ourselves with every plate we make, or at least we should. But the question is always at what cost physically and emotionally. I’m not comparing what we do with Navy SEALs as far as stress levels go, but the proof is in the pudding. If you’re just going by the numbers, restaurant peeps land in the top of the suicide/addiction/mental health food chain. There’s probably more reasons than I could even count here and now. But I think a big one is this – If you love The Biz, you are probably a maladjusted misfit and glutton for punishment, neither of which bodes well for your long term personal growth. And only so much booze, blow, sex and weed can make up for that hole deep inside you.

But there is hope, believe me. That hope can be elusive and painful but there is a certain salvation to be found via the pan and heart.