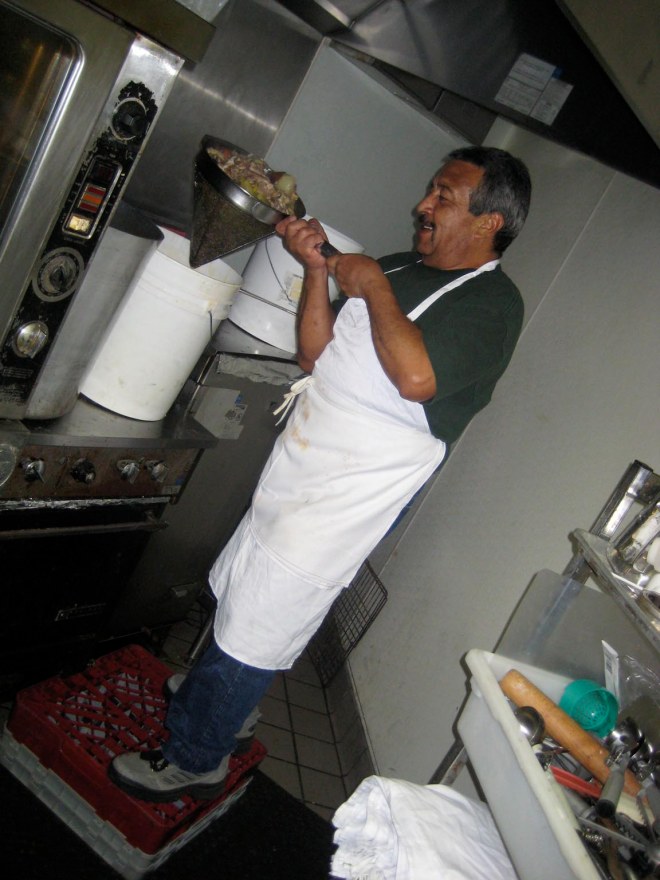 Few outside F&B have experienced what is termed “bar rot” but believe me, it’s nasty. It comes from spending hours upon hours with your hands submerged in the various cleaning/sanitizing solutions required by your local, friendly health department. I’ve had it bad, seen it worse, and it’s no walk in the park. It starts with a bit of soreness around your index and middle fingers, soon progressing into rotten cuticles, infected fingernails and horribly painful cracks around your thumbnail that are spectacularly agonizing when exposed to citrus or salt and can lead to skin loss. I’m not insinuating for a second it’s as bad as what farmers, welders or Army bomb disposal people go through but it’s surprisingly gnarly for an industry as otherwise polished as ours.

I hate doing dishes but I’ll jump back there if we are short-dicked one night because the la migra picked one of our guys up. My first gig doing dishes was at the Claremont Colleges Faculty House where I worked under the fresh-off-the-boat-from-Palm-Springs Chef Nat Gambino and his pantry guy Jesus. That was a lesson, believe me. It’s not an easy life back there. Like sliding around on greasy, slippery anti-fatigue mats? Sweet. Dig getting burned by hot pans, doing menial prep work and mopping floors? That’s job for you!

All the glamour is out front. The champagne and cocaine is reserved for a privileged few but you can bet they need someone to clean up the puke and sweep up the batman baggies and bindles. And the only upside to their job is free food and the Banda or Ranchera music blaring from their beat up ghetto blaster on the stainless steel shelf above the dish station.

It is said behind every great man there’s a woman and believe me behind every great chef there is some poor slob scraping plates, emptying trash and drying silverware somewhere. That doesn’t mean that his/hers efforts are any less important to grand scheme of the restaurant biz, it just means they get the biggest bite of the back of house shit sandwich. And prostitution may be the world’s oldest profession but I bet washing dishes is right behind it. Whether in the smoke filled eateries of ancient China, grand Roman cavalcades (with frequent trips to the vomitorium) or dark, cold kitchens of European castles there has always been someone there at the bottom of the culinary totem pole doing work that most others won’t. Maybe it’s easier with a cushy union gig at Disney or some hotel but there really isn’t much upside to it.

It seems most of the super lavasplatos hail from Jalisco and Mexico City, and for some reason all the pinche cocineros are all from Guadalajara unless you are in New York City where all the back of house guys seem to come from Puebla. They all have one thing in common though, coming here to make a few bucks and get away from the narcos back home. I’ve seen some dishwashers become very talented chefs and it’s a great way for someone that is new to the country (and maybe not able to work legally) to get their foot in the door. Now, there are some for sure that are there to do the minimum, milk the clock and display a general malaise towards their duties. Most others, however, hustle, grind and start to read your mind like Radar O’Rielly from MASH, handing you a necessary implement a moment before you even realize you need it. Those are ones you keep and believe me at some point they become more valuable to the operation than even the most skilled of floor managers. A dishwasher that knows how to unclog that grease trap in a timely fashion without calling a plumber is going to save plenty of money and headaches in the long run.

So the next time you go out to eat or are awestruck by whomever the current celebrity chef du joir is don’t forget about this unheralded cog in the restaurant machine. While you are driving home in you new 7 series he is, at best, driving his ’92 Sentra or, at worst, on a bike or the bus. And going home to a rented room somewhere where there may or may not have three families living under one roof. So maybe, just maybe, poke your head in back some time to say thank you and slip them a 20 spot. Trust me, they aren’t making any money; they could use the propinas.

One year ago today @fstlayn and myself were in Grass Valley to break ground on the tiny house with @nepptune88 and @allensworthmusic right behind us to do the heavy lifting on the framing. The whole thing was part of a plan to radically change the way I lived my life both personally and professionally. Although I’ve endured a ton of loss the deaths of @stevesoto and @kimshattuck were the final cues that this life is pretty Goddam short and the clock is definitely ticking as we move along. So off I went with the gracious accommodation of @schmugg and @gribbiesmalls on their land to become a full time Private Chef on agency placements statewide and work NorCal in a place that means a lot to me. It’s been a ton of logistics and mishaps, like taking a 10 foot clear fall onto bare plywood falling out of my loft during construction - it could have been really bad (note to self, watch those ladders). But what started out as a few drawings in the kitchen @vermilion_valley_resort with my dear friend Dave Woolley (RIP) has become a wonderful addition to this life. 2021 was the year to make a lot of moves and I couldn’t feel any happier with the results. Some of you know what my life was like 4 years ago today, it was pretty dark and messy. Onwards and upwards. Thanks and so much love to everyone that went above and beyond to assist with this. #gratitide indeed!
For decades I’ve been taking kitchen notes and making shopping lists on 8 1/2x11” sheets of paper folded in half. My brother Chris did the same. Just kinda easier to carry around and I like writing on thick stock anyway - I know that sounds silly :-) But until very recently I haven’t kept them. I now wish I had, it would be a mighty stack of notes over 30 years but what a tale it would have told……. #herestochris #brothers #fromthemauarchives #cheflife🔪 #kitchennotes #lists #foodtales #history #vermilionvalleyresort #highsierrapackstation #proofandcooper #districtlounge #twobrothersbbq #lindasdollhut #ocmusic
Back in ‘94 this place was called El Cocinero before it became Tokyo Cafe and now this random ramen shop. They were a homey, decent sit down Mexican joint, with marginal salsa and lousy chips, but a formidable Machaca plate. I used to have it once or twice a week. I remember sitting there one afternoon having a late lunch when I spotted the #nodoubt kids pushing a shopping cart full of instruments down the sidewalk. This was before I had really got to know any of them, was still figuring out the whats and wherefores of the OC and hadn’t met the world yet working at Linda’s Doll Hut. I didn’t see the photographer and it was kind of surreal to be honest. I still think of that afternoon, along with the innumerable other memories there, when I’m walking Rascal and ruminating on my time in Old Town. It’s been quite a ride. Thank you @cicc.girl70 for showing me the place for the very first time back when it was a sleepy oasis in the middle of Orange County. There have been ups and downs but it still feels like home to this transplant from the 909. #ocmusic #ocska #saveferris #lindasdollhut #oldtownorange #cityoforangehistory #cityoforange #itsbeenquitearide
HEY EVERYONE!!! @jubei_usagi and myself have a gig in NorCal this weekend and I am doing a legit run of Rev Marton’s Savory Bar-B-Que Savior Sauce from the @district_orange days here at Casa de Mau! It’s the real deal, 24 hour run made the right way but it’s “a tantear” (thank you @gustavo_arellano ) since the original, hand-written recipe is currently missing. I only really need a quart or so but dig the clients so I decided to make a full run - it tastes better. SO!!!! If you want some it will be ready tomorrow afternoon and I will keep it around as long as it holds. I have a couple stray containers, otherwise bring your own. You know where to find me!!! (Sorry @hellcathamby for hammering the O’Keefe and Merrit 😆) Get some BBQ sauce while you can, no charge btw. #bbqsauce #bbq #herestochris #brotherhood #thingsthatmatter #fromthemauarchives #districtloungeorange #recipes #tritip #texasbbq
A real moment today in Norcal, did the first service with my new agency in Sonoma proper. Watched the sun rise over the valley, could see down into what was once the humble pueblo my ancestors settled in the 1850’s after sailing from France and around The Horn. Several generations were born, lived and died there - could even see the hill outside town where the cemetery is located. That’s where they rest eternally at the Robin family plot. They must have been smiling down on me, the company and food were great. #thingsthatmatter indeed. Thanks @ajaclay99 for the pic :-) Dreams do come true, just gotta seek them out. #cheflife🔪 #takeachef #privatechef #fromthemauarchives #sonomacounty #sonoma #valleyofthemoon #napa #ontheroad #travelingchef #gogetit #itworksifyouworkit #workworkwork #dreams #familyhistory #winecountry
So the coffin I built was put to good use yesterday, StinkE made his last trip down the streets of @virginiacity and into the local, old-timey cemetery. It was an honor to be part of this even though I never met the guy, maybe that makes it more special. Life is a wonderful, iridescent thing - short, dangerous and filled with amazing moments like this. Go find yours. Thanks @jeffsu1182 for forwarding the pic. #thingsthatmatter #coffinmaker #cheflife🔪 #virginiacitynv #stinke #funeralprocession #oldwest #oldnevada #silvercountry #cabinetry